In the Caucasus, it is said that the Armenian, Georgian and Azerbaijani culinary are sisters, given for education in different families. The peculiarities of the Azerbaijan cuisine lie in the fact that many dishes that are used by other nations are prepared in their own way. 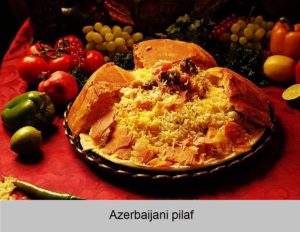 The pilaf widely spread in Azerbaijan differs significantly from the Central Asian one. Its constituent parts – rice and gara (meat, fruit, egg and other bases) are prepared separately and combined only when served on a table. In this regard, great importance is attached to the preparation of rice. There are several ways to boil it: in a napkin, placed over a pot of boiling water; On kazmach – the thin layer of fresh dough, which lined the bottom and walls of cauldron, etc. Part of the rice in pilaf is painted with saffron. For the basis use fresh and dried fruit, almonds and nuts are fried in a butter. 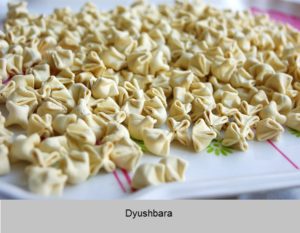 Azerbaijani dishes like dumplings are also peculiar. Dyushbara are first fried in oil, then boiled in a small amount of water. Kurze (pies with a small hole at the end) is smeared with melted fat and placed in a saucepan at an angle, after which they are poured with salted boiling water and cooked on low heat. Meat for giymya-khinkal is pre-fried together with onions, to it is added the juice of immature grapes and the mashed kurt – dry cheese.

Meat dishes are mainly mutton, preferably young. A well-known lyulya-kebab is prepared from lamb. Lamb is also needed for the famous piti – soup in a special pot of piti, from which it got its name. 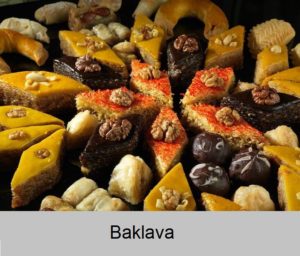 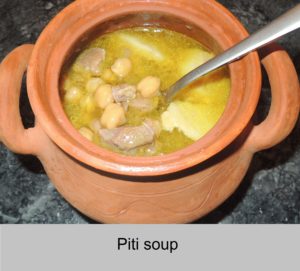 Soups in the Azerbaijan cuisine are prepared mainly on meat and bone broth with the use of fat-tail and a large number of spices and spices. Some foods in national dishes can be replaced: fat-tail – melted butter, chestnuts – potatoes. If you use fresh tomatoes, plum and saffron in the dish do not put. Some of the first dishes, such as piti soup, are prepared and served in a separate, specially designed dishes.

Azerbaijan sherbets are soft drinks. For their preparation as a fruit base are used juices of acid fruits and berries – cherry plums, lemon, pomegranate, unripe grapes. In addition, a 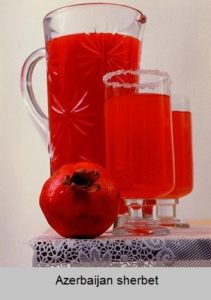 mandatory component is rose syrup or rose oil. According to tradition, each variety of sherbet should have its own color: lemon – yellow, mint – green, pomegranate – red-carmine. Therefore, sherbet should be served in a transparent container.

For the preparation of rose syrup, petals of rose or rose hip, collected on a dry, sunny day, put in a glass vessel in layers of 0.5 cm, sprinkling each layer with powdered sugar. As the syrup is separated, pour it into a separate bowl, pouring powdered sugar into the remaining petals. The resulting syrup is filtered, poured into a bottle and tightly corked. On 1 liter of sherbet goes no more than 1 h l rose syrup or a drop of rose oil.

Dishes of Azerbaijan cuisine diversify any holiday, and you can pleasantly surprise your loved ones. We invite you to see some recipes. 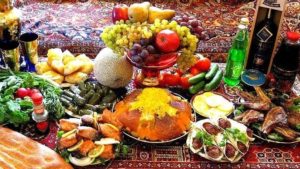