Georgian cuisine, whose separate dishes have acquired a truly international character, is not homogeneous. Historically, there was a difference between the cuisines of Western and Eastern Georgia, this difference still holds true. If residents of Eastern Georgia eat wheat bread, then in the western part preference is given to mchadi – flat bread from corn flour, which is used instead of bread. In Eastern Georgia, meat dishes are mainly made from beef, less often from mutton. The West – poultry – chickens and turkeys are very popular. In the Eastern part, they make sharp and salty cheeses (Kobiyskiy, Tushinskiy and Georgian), in Western Georgia they are more fresh (Suluguni, Imeretinsky). There are some differences in the use of spices and the preparation of sauces. However, in the main – the main set of products and technologies for their preparation, 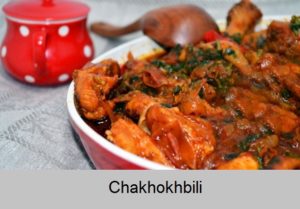 One of them is almost equal to all kinds of meat. Such national dishes as muzhizhi, are prepared from pork, kupatyi – from pork and beef, chanakhi – from mutton, chakhokhbili from poultry, mutton and beef, the famous Georgian shish kebab – from beef, mutton and pork.

A great place in national cuisine is given to dishes from vegetables. The Georgians especially love the eggplant and beans. Eggplant baked, boiled, stewed, fried, stuffed and marinated. Georgian cuisine includes dozens of lobio species – dishes from boiled beans. 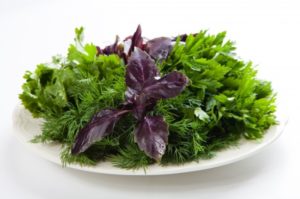 A characteristic feature of Georgian cuisine is the widespread use of local cheeses. Cheese is a part of various dishes, it is fried on a spit or in a frying pan, baked in a dough (khachapuri). 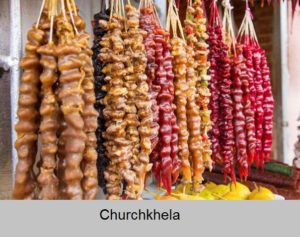 Peculiar and national sweets – churchkhela, which is prepa red from nuts and grape juice, and traditional treats gozinaki.

Georgian soups are quite dense in consistency and high in calories. For example, hashi – a very strong broth of beef and sheep legs. In many Georgian soups, both meat and vegetarian, an acidic base is used – mashed potatoes from the plum tkemali (wild alycha variety), condensed and dried puree of tkemali (tklapi), fresh tomatoes, tomato puree, sour milk (matzoni), wine vinegar and Etc. The famous soup kharcho is especially delicious when cooked with the addition of tklapi.

Meat dishes roasted on a spit are considered the most exquisite dishes of the Georgian table.  Poultry or meat, strung on a skewer and fried over red-hot charcoal, tastes better and juicier than those prepared in another way. 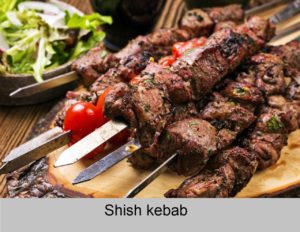 It is no accident that the Georgian shish kebab (mtsvadi) has gained truly world fame. He was appreciated by the famous French writer Alexander Dumas, who traveled the Caucasus. 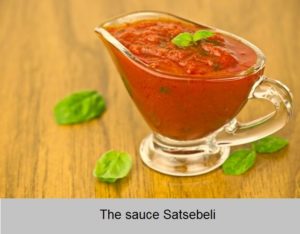 All Georgian cuisine is characterized by the widespread use of nuts, primarily of Greek. Without nuts, it is impossible to cook many national dishes from meat, poultry, vegetables and even fish. Nuts – an obligatory component of sauces satsivi, satsebeli, garo. In general, in place, which occupy sauces in national cuisine, Georgian cuisine can only be compared with French.The sauces themselves, of course, do not make sense to compare. Heat treatment of Georgian sauces sometimes boils down to the boiling of fruits, berries and vegetables (tkemali, cornel, blackthorn, tomatoes). In nut sauces mixed crushed nuts with sour juices, wine vinegar, broth and boiled water. In sauces must include spices.

Our site also pays much attention to Georgian dishes. These dishes are very original, amazing and tasty. 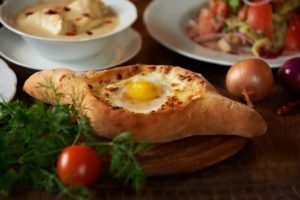