The very satisfying dish, common in the Eastern nations. Shurpa is a very fatty, rich soup, as its traditional main ingredient is mutton. The best parts of meat for shurpa – it’s loin (dorsal part) and brisket. Ribs are also suitable, although they are not so much meat. Ideally, to prepare a shurpa from several types of meat at once, without separating them from bones. So the broth will be more rich, and the soup will turn out especially tasty.

If there is not enough fat in the meat, fat tail is added, on which all the ingredients are fried. You can use vegetable oil. Instead of mutton can be used beef, poultry and even fish. Hunters can easily make a shurpa at the stake from venison. Pork in traditional shurpa is not used.

The vegetable part of the shurpa is represented by onions, carrots, potatoes, tomatoes and peppers. Onions, as a rule, is taken several times more than for European soups. Tomatoes, Bulgarian and hot peppers appeared in shurpa relatively recently by historical standards, but reliably took their place in most recipes. This dish is prepared in many countries, so it is difficult to determine who started it first. 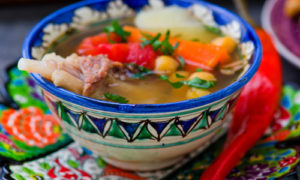 How to cook shurpa?

There are two main methods of making: fried shurpa and boiled shurpa. In the first variant, meat and other ingredients are fried in a cauldron, filled with water and cooked until ready. The second option does without frying – everything is cooked for a long time on a slow fire. Despite the fact that the products in both cases can be exactly the same, two completely different dishes are obtained, each with its own taste and character.

Vegetables for shurpa are cut large: potatoes and carrots can be cut in half, tomatoes and pepper are cut into 3-4 parts. Spices are added to the shurpa at the beginning of cooking, so that their taste and aroma permeate the meat, and salt is better added to the readiness of the meat. Fresh greens are placed at the end of cooking or already in the ready soup.

In a large saucepan with a thick bottom, pour 3 liters of cold water, dip the meat cut into large pieces, bring to a boil over medium heat, remove the foam, add a pinch of salt, zira and spices, and leave it on the lowest heat. In the meantime, cut the onions into rings or half rings, mutton fat with small cubes, add them to the meat and cook for half an hour. Add the chopped carrots and potatoes, a whole pod of hot pepper and leave for another hour.

Tomatoes scalded with boiling water, dip into cold water and peel, add together with finely chopped sweet pepper in the soup for 15 minutes until ready, salt. Pour the soup over the bowls, add in each serving finely chopped greens and serve! 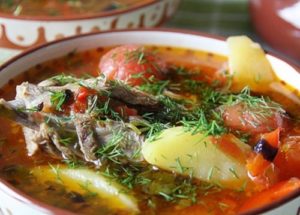