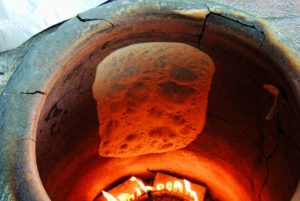 Armenian cuisine is one of the oldest in the world. The main features of this cuisine was formed long before our era and has survived in our time. In the excavations, belonging to the IX – VII centuries BC, discovered wheat, found the remains of bread baked from flour coarsely ground. For millennia, there is a round clay hearth – tonur. It bake Armenian national bread – lavash. In some rural areas, the custom harvest in autumn, pita in reserve. Dried and folded stacks, it can be stored for 3-4 months. To return the pita bread is soft, it is enough to sprinkle it with water and leave covered for half an hour. This ability to persist for a long time, as well as high nutritional properties explain the longevity of pita bread. 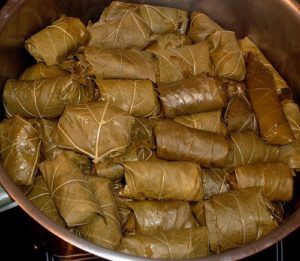 The antiquity of the Armenian cuisine affects the technology of cooking. It is usually difficult. Preparation of most meat, vegetable dishes, culinary products requires a lot of time and labor. For example, for kololik (soup) and kololak (second dish), meat is beaten with a wooden hammer to obtain a souffle mass. Pounded meat serves as a filling for tolma from cabbage, tomatoes, peppers, onions, courgettes, eggplant, apples and quinces.

Folding in rich natural conditions, Armenian cuisine widely uses vegetables. From vegetables they prepare independent dishes, they are eaten in raw, pickled, marinated. Vegetables and fruits are a part of soups, dishes from meat and fish. Armenians eat a lot of onions. In the national cuisine there are many acute dishes with a significant content of salt, a large assortment of spices necessary to stimulate appetite in a hot climate. The climate has also built a traditional diet, which is still preserved, especially in rural areas:

Armenian cuisine has its own specific methods of processing and cooking fish. The most valuable is the Sevan trout (ishkhan). Fish do not fry, do not boil, and stew in a small amount of liquid on low heat. Almost without changes has come to our days an ancient dish kutap – a trout stuffed with rice, seasoned with oil, raisins, ginger.

Armenian cooking has created a rich assortment of soups. This is one of the oldest Armenian dishes – khash, which spread throughout the Transcaucasus. A variety of Bozbash (mutton soup with various vegetables and even fruits), kololik (soup with meatballs, but significantly different from a similar European dish), original soups on meat, chicken and fish broth. A somewhat smaller group consists of cereal, vegetable, dairy, fruit.

Armenian fish culinary uses fish of local breeds, in particular Sevan trout (ishkhan), kogak, whitefish. Sevan trout should be cut very carefully, so as not to crumple the flesh of the fish and not to separate it from the bones. To prepare some dishes, trout gut, without cutting the abdomen: through the hole formed after the removal of the gills, take out the internals with a spoon, thoroughly rinse the entire cavity. Processed trout can be cooked, fried, baked, but in Armenia it is mostly stewed, that is, brewed in a small amount of water. 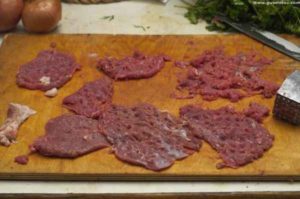 In the Armenian cuisine a rather large place is occupied by dishes made from crushed meat, which is used for stuffing vegetables and fruits, preparing kololak, boraki and so on.

I’m sure you will like the dishes of Armenian cuisine. On our website you will find several interesting recipes. So, a pleasant appetite! 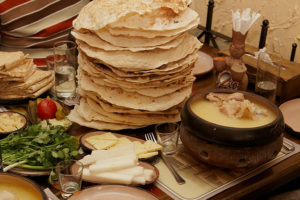